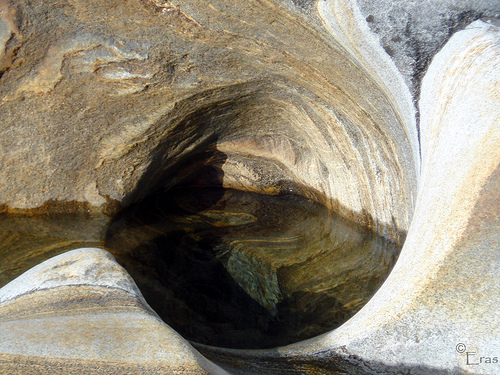 Many of the theurgic techniques I have been developing include, or are to be used in conjunction with, A Simple Circle Casting For Polytheistic Theurgic Workings. A few of the techniques I have posted for meditating with deities or the mythic persona are in some way based on it.

By itself, the technique is useful in setting space for trance work, assuring that one has the right deity for contracts, and meditations on one and only one deity.

This past Sunday, I got together with friends from Pandemos, because I want to start using this boundary-setting technique as preparation for trance work, among other things.

As we were working with the technique, a friend (who will be named later) observed that expanding the walls to the top and bottom, except for the small inlet at the top, left an undesirable weak spot at the bottom for the sphere defining the space.

Heathen Chinese, who was also there at the time, had a great idea to seal it. The idea was to salute the Land Spirits, knock once, and then, with the intention to fortify the bottom, knock three times.

This worked wonderfully well. I therefore present to you a revision of this technique.

Purify your space according to your usual custom. I like to sprinkle it with khernips.

Take a moment to honor the various deities, spirits and ancestors in your life, and let them know that you will be temporarily unable to hear them. Explain your purpose as needed.

The suggested preliminary invocation is mythologically specific, and all to do with relationships. Parents are mentioned first, perhaps other deities, then lastly, mortals, in order of their generation, if there be any.

Here is an example for Apollon:

To Apollon I call
Famed son of Zeus and Leto
Far-shooting brother of Artemis
Physician, Father of Asklepios
Musician, Father of Orpheus
Lover of Hyacinthos,
God of Socrates
Come to me. Let the boundaries I draw be for you and me alone,
A place where none other can transgress

Here is one for Hermes:

Hermes, son of Zeus and Maia
Savior of Odysseus,
God of Aesop
Assist me with the drawing of this boundary,
which shall make this space yours and yours alone.

Trace a line around the perimeter of the space, imagining that line in black flame. Do this three times, saying something to the effect of:

I cast this boundary round about

Imagine the line expanding and becoming thicker, extending under your feet, and arching overhead, leaving only one small circle of white. On that circle of white, trace the name of the deity in golden light.

Kneel down in the center of the space saying:

“Hail to the spirits of the land. We promise to tread lightly.”

Then, imagine where the blackness is gathered at the bottom growing very thick. Knock three times, imagining that you are pounding the interior surface smooth.