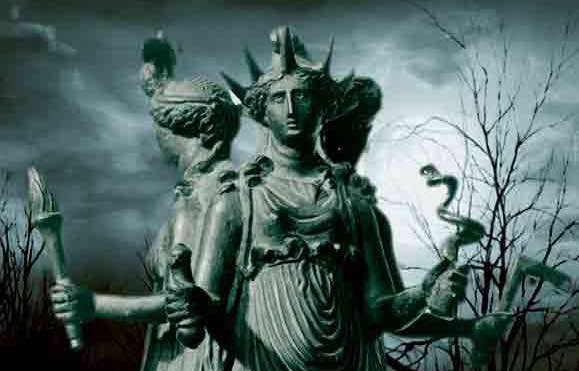 Hekate is a goddess of liminal spaces, of the basic elements of reality, of travelers and of magic. She is traditionally honored at the New Moon, in her role as care-taker of the dead, and alongside Artemis and Kourotrophos at a festival focusing on rearing children.

This series of devotionals is breaking from the ancient custom of honoring the deities at their festival times. Each region of Greece had its own calendar of festivals. In honesty, I think that each region of modern Polytheists needs to as well. A devotional, as such, is a framework. For home-crafted festivals, simply add activities or prayers specific to the occasion.

I want to put out a stern admonition, however, against focusing on only one or two deities in this vast pantheon. A pantheon is a whole: it represents the entire universe. In monotheistic religions, they have a deity who represents everything. In a Polytheistic tradition, the gods are not themselves in isolation. The more you understand the pantheon, the more deeply you will be able to connect to the deity in question. For more thoughts on this topic, read this.

A wash cup (a coffee mug will do in a pinch)

A towel (for drying hands)

A cup to make libations from

A vessel to make libations into if you are indoors. Anything will do, but a small fire is best. If outdoors, into the ground is fine for Hekate, since she is a Chthonic deity.

Make some khernips in advance. This is just a combination of water, salt and fire, but directions are here.

Take a bowl of khernips in your hand, and process to your space, then process around your space, sprinkling as you go.

Taste the libation, and then pour the rest out to Hestia.

As a side note: really, as long as part goes to you, and part goes to the deity, you shouldn’t drive yourself mad over who drinks first, or who gets what portion. Iamblichus suggests that you should libate from a different side of the cup where you drink.

Read this selection from the Orphic Hymn to Hekate. I have left off the lines about incense, since this simple devotional calls for none.

“And to my holy sacrifice invite,
the pow’r who reigns in deepest hell and night;
I call Einodian Hecate, lovely dame,
of earthly, wat’ry, and celestial frame,
Sepulchral, in a saffron veil array’d,
leas’d with dark ghosts that wander thro’ the shade;
Persian, unconquerable huntress hail!
The world’s key-bearer never doom’d to fail
On the rough rock to wander thee delights,
leader and nurse be present to our rites”

You may, of course, read additional hymns or invocations, but this should be sufficient.

Taste the libation, and then pour the rest out to Hekate.

You’ve called the deity, and now you should spend some time with her. Allow time for meditation.

You could do something creative to honor Hekate. Work on your Book of Shadows, if you have one. Write or read something applicable to issues she cares about. Create artwork that represents her.

You could spend time chanting, or doing a drum circle.

You might also choose to eat a meal during this time. If you do so, set aside a portion as offering.

7.  Closing thanks and libation to Hekate

Say: “Hekate, Lady of the Cross Roads, Three-Bodied One, I thank you for your presence in my home. May there ever be peace between us.”

Taste the libation, and then pour the rest out to Hekate.

“Hestia, by the highest decree, yours is always first and last, so that my hearth, my family and my home should never be forgotten. Thanks to you for the warmth of my home, that I may welcome the gods herein.”

Taste the libation, and then pour the rest out to Hestia.