Besides unidentifiable astral entities tangling up one’s personal astral space, the second most common issue encountered in a “woo” sense is deities being way too intense, and way too loud.

“Deity too loud” can lead to severe (and sometimes prolonged) agitation, misunderstanding the deity, even accidental channeling. “Too loud” is relative, of course. What is too loud for one might be inaudible to another. A deity, upon meeting a mortal, has to make a blind guess as to how to approach. At a ritual, a balance must be struck between a ritual which has deleterious effects on the audience, and one that is completely unimpressive, from an energetic standpoint.

If you are the sensitive sort, there are ways that you can reduce the impact a ritual has on you. This can be a good preventative measure, avoiding weirdly itense and complicated problems later.

Not only does it look marvelous on you, but it’s highly protective, if worn correctly.

White silk has long been employed by magicians to wrap talismans and consecrated tools, and for good reason. It is one of the best ways to prevent energy from getting in or out. A length of silk fabric, obscuring the gut, heart and throat, can be a wonderful tool for cutting out some of the intensity of a ritual, or over-enthusiastic deity.

I have used this to great effect when attending rituals where I was sort of iffy on whether the energies would be an okay thing for me to absorb. It doesn’t do much, however, to cut out your inner reflections of those deities, once the energies are already banging about in your system.

You need to commit to wearing the silk for the entire ritual, if it is to do its job.

There are a host of substances that disrupt energies. They don’t diminish the overall amount of energy, but they blank the energy out, making it neutral. These same things are often recommended against when one is taking homeopathic remedies. Citrus, vinegar, tobacco smoke and a number of other substances besides coffee are on the list of things which have this effect, but coffee beans are by far the most portable. Simply carry them in a small leather pouch and pop them into your mouth as needed. 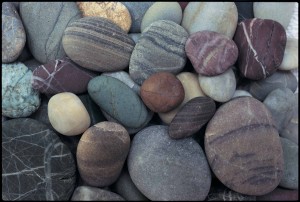 Sod crystals. Just go for rocks at the beach and some table salt.

Salt and certain stones (opaque ones), absorb energy well, and can be used to offload extra energy.

Crystals, by contrast, work a bit like capacitors or lenses. They change the way the energy is focused, but don’t hold on to nearly as much of it. Put energy into a crystal and it will softly radiate out over time. Put it into a chunk of regular rock? Not so much.