More from Hekate, but with traditional precedent. This time, a circle casting.

As was mentioned in my conversation with Hekate, and alluded to again in the glyph which I posted earlier, I’m shifting the focus of my ritual from trying to use the epithets of deities as the cornerstones and power sources for my rituals, to drawing power from the primal forces of nature as presented in Greek Mythos, the Protogenoi.

To that end, I’ve crafted a circle casting which calls in three directions, rather than four.

In particular, Hekate is nudging me toward Thalassa, Ouranos and Gaia. “By these three in particular, all powers are granted,” she said. “If you don’t believe me, then ask why it is that Zeus chose the sky and storm, rather than the sun, or why Hades was content to rule in the belly of the Earth, or Poseidon in the sea. Each ruler draws his strength from one of the three, but I, and my witches, will draw strength from all three.”

According to A Dictionary of Greek and Roman Biography and Mythology (edited by Sir William Smith), “According to the most genuine traditions, she appears to have been an ancient Thracian divinity, and a Titan, who, from the time of the Titans, ruled in heaven, on the earth, and in the sea” (p346) Yes, I know that I’m being lazy and annoying by quoting a secondary source text. Really, though, I just wanted to establish that this wasn’t me coming out of left field with complete off-the-wall unsubstantiated gnosis.

Hekate went on to say, “It is by these essences, embodied by these protogenoi, that all life is created, save for the inimitable spark of divinity, which must instead be gifted by one who already possesses it.”

What about fire, you ask? I asked that too.

“Fire is but an emblem, a symbol which alludes to divinity. In magick, you do yourself no disservice by directly calling Divinity Itself, rather than fire, but why call it at all? If not for that spark, you wouldn’t be standing here talking to me, now would you?”

This rather reminds me of a technique I learned in my Golden Dawn days: “The creation of an artificial elemental spirit.”

The long and short of the technique is that you take what is for all intents and purposes, a figment of your imagination, and imbue it with divine power to turn it into a conscious entity. Granted, its intelligence is limited, and it does only what you tell it to. After my Golden Dawn days, I tried fixing these thought forms into physical objects, and found that the intensity of the manifestation was much greater.

A cast circle is a thought form, too. You have to imagine it powerfully, and then call divine powers into it to make it work. It then does an assigned task: hold energy in the space and protect those within, or whatever else you intend for it to do, or expect it to do, depending on what your tradition says it should do.

So, I began to think… gosh, if you could fix a circle’s thought form into a stone, or a skull, or a rose, or whatever, you’d have a much stronger circle, and if we treat a circle like just another servitor, we can make up all kind of new rules for how that boundary works.

So, to that end, I wrote a new kind of circle casting, which I will share with you, based on this notion of circle as servitor, fixing the servitor into a stone, and calling upon the powers of Thalassa, Ouranos and Gaia.

You’ll want a cup of water, a stick of incense, a dish of salt, a big rock, and a wand or athame (dagger).

Drawing the Boundary With An Athame or Wand 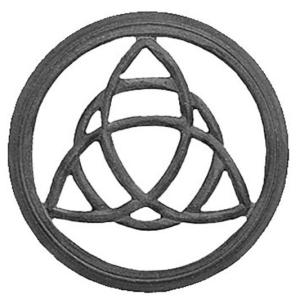 This step is similar to formulating the shape of a servitor in your imagination, only you are doing it by physically walking around your space. In the most ideal of circumstances, you have some kind of boundary permanently drawn onto your floor that is a perfect circle, but seriously, who does that?

Most of us have very irregularly shaped spaces, either some wannabe square that is actually a rectangle, or a rectangle except where it juts in, or out, around where the door is, or some weird inlet, or a “I used to be a hearth but now I’m just an awkward wall” sort of structure. Consequently, you need to spend time thinking about where, exactly, you want your boundary to be.

Marking out the boundary three times helps to reinforce it in our imagination.

Imagine the boundary you draw. It can be any color you like, in my opinion, as long as it stands out to you. White is fine. Some people love blue. I like to imagine fire on the ground where I draw it, and smoke rising up from it, or grass sprouting from the carpet, or a line of ice crystals forming, or a happy rainbow. In my experience, any of these work well. The most important thing is that it is easy to imagine.

The Blessings of Gaia

Hold the salt dish, and connect to the Earth. You will want to imagine it in great detail. Think about what the Earth is doing outside. Is it frozen? Damp? Hard? Are there worms crawling in it? Seedlings sprouting up from it?

Draw up the power of the living, fertile Earth, and fill yourself with it. Then, breathe that power out into the salt.

Say: “Creature of Earth, in the name of Gaia, I bless and consecrate you to the service of Earth.”

The Blessings of Thalassa 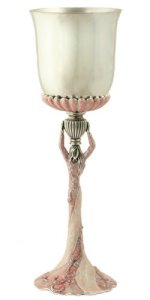 Hold the cup of water, and take a moment to imagine the ocean. Imagine lapping waves, and salty water, fish swimming and seaweed growing. Fill yourself with this power, and then breathe that out into your cup of water.

Say, “Creature of Water, Creature of Sea, in the name of Thalassa, I bless and consecrate you to the service of the living waters.”

The Blessings of Ouranos. 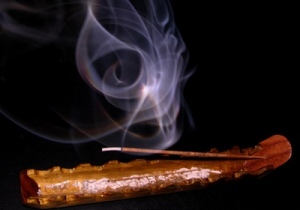 Here is where I may have some misgivings. I’ve read the mythology of Ouranos, and to be fair, I didn’t particularly like him. He brutalized Gaia, and nearly prevented an entire generation of gods from every being born. Yet, he is the Sky. He is, in many senses, the air that we breathe, Anemoi notwithstanding.

Yet, Hekate admonishes, “There are no gods that you should not call. There are no forces of nature you cannot befriend. Remember that he paid his due… and did he ever. As the Christians say, if your right hand causeth you to sin? That sinful part of Ouranos has been removed, and therefore, the evil is gone from him.”

Here, especially, we are envisioning purely the air, the blueness of the sky, the wandering clouds, and the heights of Heaven. Breathing that in, then breathing out into the incense. Here is the curious part: into the solid, unburnt part, so that the energies will be released as it burns.

Say: “Creature of Air, in the name of Ouranos, I bless and consecrate you to the service of Air.”

Sprinkle salt into the chalice, and then blow incense smoke into the cup.

Upraise the chalice, saying “By these together, all things live.”

Now take the stone in hand, and sprinkle it with the waters of the chalice.  In so doing, you need to imagine transferring the power 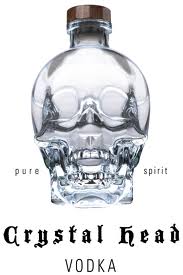 from the chalice to the stone. You may also dip the stone into the cup.

You’ll want to name the stone something appropriate. I never do this, incidentally. I used a Crystal Head Vodka bottle and named it “Mr. Skull Head.” The name stuck, like it does, and to this day, I don’t feel comfortable naming it anything else. So, by appropriate, I do indeed mean that you would feel ok referring to your chosen object by that name basically forever.

Say, “I charge you, ____________, to hold the boundaries of this circle as I have defined them by my wand/athame (insert terms and rules), until such time as I command you to sleep, whereupon you will return the energies of land, sea and sky to Gaia, Thalassa and Ouranos. __________, so I charge you, and so I command you.”

When you are done, you can close the circle, very simply, by commanding the guardian to sleep.

In addition to what I mentioned above, I sometimes add the following:

– “Admitting only physical human beings and (deity or deities). If your boundaries should become weakened by the busy feet of human beings, re-draw them, using the power of Land, Sea and Sky, harming none.”

– “Assisting all deities who trod herein with physically manifesting.”

– “Causing any human who thinks about entering this room decide to go somewhere else.”

Or any other terms that might come to mind. Properly retooled, you can ask your guardian to assist with your spell work, have them nudge ritual participants into very specific states of mind, and of course, hold boundaries for more powerful workings.