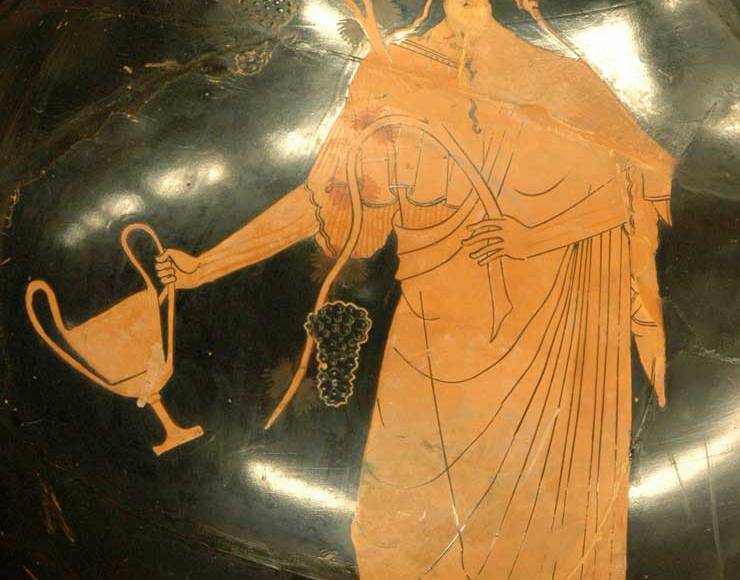 If you find cartoon body parts offensive, I suggest you do not look any further. Classical art is basically chock full of penises. That said.

I began, recently, to research images of Dionysos for the purpose of crafting a godform for him. This turned out to be a lot more difficult than I anticipated. The first image I found was this one, of a Maenad and Satyr. (Penises behind the cut)

What in the holy name of hell is going on in this picture?

Let me start with the obvious: this lady is ramming a thyrsos, pine-cone first, full force, into the erect penis of a satyr. Look at that satyr! He has literally been lifted off of his feet, and is hurtling backward owing to the sheer force of this nut shot.

I now draw your attention to the up-raised hand, poised for a full-on bitch slap.

That would be enough, in the arena of interesting pictures, but now I’d like to point out another peculiarity: the clothing is transparent, yet everything is carefully arranged to obscure the gender of the figure holding that thyrsos. Perfect.

It does, however, contain a host of Dionysian gender-fuckery that any good Dionysos godform should not be without. The floor-length chiton (rather than ankle length) is a female garment, but the animal skin seems to be worn as a kind of chlamys, or cloak, which was typically male (even military) attire. The Thyrsos is positioned to look almost like an erect phallus.

A good telesmatic image includes all of the standard symbolism of the deity in question, and this one nearly does. An excellent telesmatic image does this, and in addition, manages to hint at multiple aspects of the deity, all at once. Effeminate, yet kick-ass, ivy-wrapped and wand-bearing, clothed in the skins of animals, dressed in the strange clothes of a foreigner and serving up your daily dose of the W, T and F.

One problem: This is not Dionysos.

It does raise some interesting questions about the role of Maenads, however. In some senses, this maenad, in particular, could easily be mistaken for a young Dionysos.

“However, when Hypolipnus saw him, a mere boy in years, excelling all others in remarkable beauty of form, he asked from him the reward that could be given without loss. Liber, however, eager for his mother, swore that if he brought her back, he would do as he wished, on terms, though, that a god could swear to a shameless man. At this, Hypolipnus showed the entrance.” (Pseudo-Hyginus, Astronomica 2. 5 [trans. Grant])

Still, I was pretty sold on this picture for it’s sense of excitement and motion. I decided to use it as a basis for the youthful Dionysos, or a

Springly Dionysos for the Anthesteria. I determined that I needed to clarify the spots as leopard spots, particularly, and add a wine cup.

So, the wine cup that this image of Dionysos features is not the standard flat kylix that I am accustomed to seeing (Athenian style, I guess), and is too deep to be the Ionian style of Kylix, which is stemmed. Rather, it is a stemmed kantharos, perhaps in a Boetian style.

Armed with a starting figure, or at least a starting pose, a strange garment, and an especially Dionysian wine cup, I began drafting an image. I tried to preserve the sense of momentum and motion in the original picture of the maenad, but added a detail to clarify the gender of the figure (ah-hehm) as well as grapes and a kantharos.

I like the clean lines, although the confusing, blatant nudity here began to rub me the wrong way, and so, thinking largely about the festival of blooms, I decided to add some garlands of flowers.

This, in particular, would be an excellent godform for the maenad to don during Dionysian ritual, or for the priest or priestess to use for Spring rituals.

I will be following up with a more Autumnal godform soon.

Things Get BetterApril 4, 2021
Did You Get Your Vaccine?