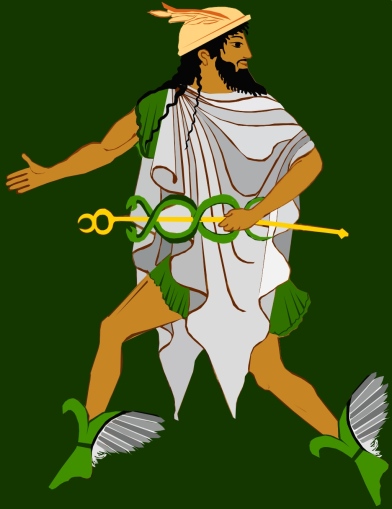 So, here is the godform I worked up for Hermes. I chose an earthy color palette, and, conspicuously, darker hair for this particular form. He is also shown here with longer hair (rather than the usual shorter locks of extreme volume) and with both chiton and chlamys (rather than being mostly naked with fabric weirdly draped over one arm).

The work is derivative of an image on a vase. Again, you will see that the god is shown with long, dark hair, and much more Eastern features. I chose this as a starting place for the godform because, unlike the hundreds of other images that I sorted through, I really feel that it captures his personality — a certain air of mirth, mischief and misdirection hangs over the facial expression as well as the body language. The eye can’t quite tell whether he’s coming or going.

In adapting the work, however, I added snakes to his staff, and a winged hat, which I felt was sort of crucial to a successful thought- form.

In many ways, I feel that this came out much better than the previous image of Hekate. The lines and the colors are simpler, and the whole thing is liable to be more successful as an image one might memorize.

My one regret is that I think I may have made the snakes on the staff too short. In general, I probably should have given more attention to the staff in general.

For more details on what these images are used for, please see my post on Visual Evocation.