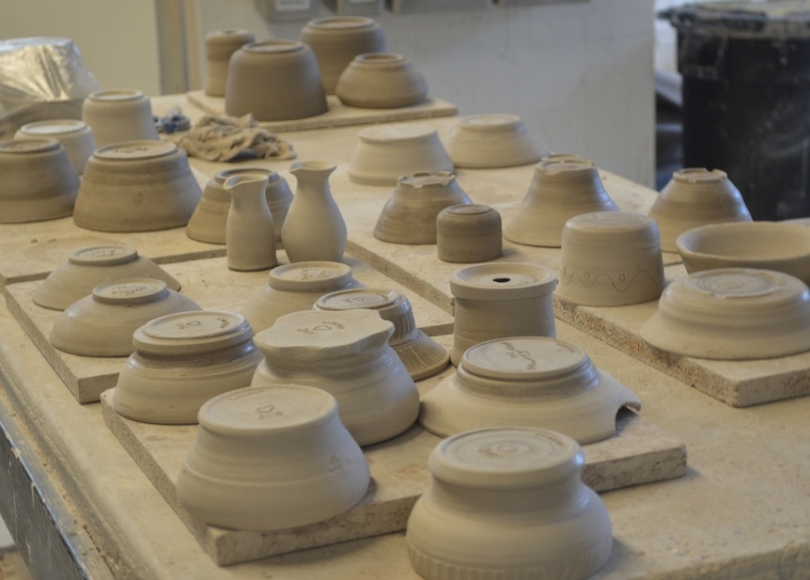 Where I throw my pottery, there is a student I envy. She’s been throwing for about two thirds of the time I have, and she is already very close to being a Master Potter. She simply has a soaring talent with clay that no amount of practice can ever make up for.

Today, I saw her staring at a gorgeous bowl she had made, biting her lip. It was a fine thing, tall and wide and with a dainty wall, the sort that sings a little when you tap it. It was leather hard, ready to trim, and apparently giving her some pause.

“It’s not right. It’s just all uneven.” She waved her hand in a rounded quibble, to indicate the the wall had a slight wave to it, all around the circumference. “Maybe I should just throw it out.”

I peered over. “Lemme see the inside.”

She carefully slid the bowl over to the edge of the wheel, and even more carefully flipped it over.

“The inside has a nice, continuous curve,” I said. “Get a continuous curve on the outside, and I think you’re golden. And if the unevenness is going to bother you, just put a chatter on it.” (A chatter is a textured pattern made from a vibrating metal tool held to the  piece during trimming while it spins).

She was literally going to throw it away. It was, I later heard from the teacher, a masterwork quality piece. She was just going to crumple it up and recycle the clay.

Hera was angry and spoke thus among the assembled gods :

But silver-shod Thetis the daughter of Nereus took and cared for him with her sisters: would that she had done other service to the blessed gods!’

Hephaistos, too, came out a bit uneven. In many versions of his birth, Hera conceives him alone, a virgin birth, if you will. He is more than her son — he is her creation. The god of technology, the god the fire, of mechanical ingenuity, of art and craftsmanship. She wanted to throw him out because he was a little uneven.

And then here comes Thetis and says, “Why would someone throw out a perfectly good god-baby?”

Hephaistos is, in a sense, both the artist and the artist’s handiwork. Inevitably, people will see far more beauty in one another’s creations than in their own. Why?

When my virtuoso potter friend was examining her bowl, she wasn’t evaluating it aesthetically. She was comparing what was in front of her to what she tried to make. She was seeing her own short-comings as a potter. She was seeing the piece she had created in the shadow of the imaginary, ideal piece that she had intended.

Here is a secret about pottery: the piece you get in the end is NEVER the piece you conceive of. My friend, though she is perhaps more skilled than I will ever be, hasn’t been throwing long enough to know and accept this fact. It isn’t until you’ve dropped a hundred pieces and dented a hundred pieces, and seen a hundred pieces collapse on the wheel, and seen the kiln lay waste to your best handiwork through sheer chance, and glaze turn the most beautiful thing you have made to date into a wasteland of sharp glass edges, and then turned around and gifted something you thought was sub-par to someone who loved it to pieces BECAUSE of its flaws that you start to develop a certain empathy for yourself in your imperfections as a potter.

With our bodies, too, we sometimes fail to see with our eyes. We don’t see the body in the mirror for what it is. Rather, we hold it up to an imaginary and impossible ideal, and only see the negative space between what should be and what is.

Even in our relationships, when they fall short of our expectations, we can see, cast in painful relief, our inability to have the relationships we want, or our inability to solve the interpersonal problems we have. We see our interactions with other people in the shadow of what should be, and the negative space hurts. It makes us feel disappointment and anger. But in truth, not one of us achieves the ideal.

Hera was deceived. Athena’s birth was no single-handed endeavor. Hera simply didn’t know about Metis (quite by design, I’m sure). The shadow of Zeus’s perfect daughter, born apart from any goddess, is a fiction. So too with our art, our bodies and our lives. We’re sold a lie that we can have perfection, and all that we are and all that we have stands in the shadow of that lie.

For me, there is something spiritual, now, in redeeming pots. For sure, I still throw pieces away. Some are dented beyond repair, or shattered, or covered in sharp glass edges which make them unsafe. But for the irregularities, I will often create my designs around the flaws. Whether through chatter, or carving, or adding hand-built pieces, or glazing a certain way to draw out what’s unusual and unique in a piece, I try to embrace and celebrate the differences.

Imperfection is substance. It is what separates fantasy from reality, the theoretical from the actual, the design from the execution. As both artistic creation, and artist seeing the reflection of self in their art, it is only right that Hephaistos should be uneven. It’s a part of his character.