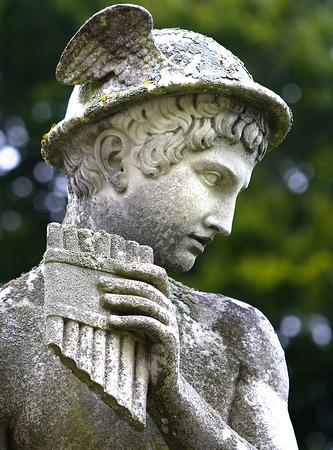 I can’t tell you how many iterations of the following conversation I have had:

Me: I’m here with Hermes.

I have heard it from practitioners of Asatru, Judaism, Christianity… you name it. He’s the nicest entity you will meet, pretty much anywhere. If you pride yourself on working with uninvolved gods who bear a striking antipathy for humankind, are highly judgmental and hate people who don’t invoke them in exactly the right way, then never work with Hermes. You won’t like him.

That doesn’t mean that working closely with him is easy. It’s not. Relationships get harder as the participants become more intimate. I think most of us have had the experience of moving into an apartment with a friend, or we at least know someone else who has had this experience. You can be great friends with someone, but becoming room mates introduces a whole level of intimacy that you didn’t have before. You have to deal with a person’s idiosyncrasies, and you need to learn to compromise with them. Too often, friends who becomes room mates are not friends anymore when the lease is up.

There were very few sharp transitions in my relationship with Hermes. I was the frog sitting in the bottom of the cook pot, metaphorically speaking. Everyone else could see that I had a devotional relationship with him, but for me, it took a while to realize. Any ritual actions I may have taken were not really “initiatory experiences” so much as an outward recognition of things that had already happened, so I can’t really participate in the “before and after” trope, in terms of dedication.

I can, however, tell you the challenges that intimacy with this deity brings.

He Is A Friend To All People

That sounds nice, on the surface of it. It sounds like a sort of trite statement of goodness. In order to understand why this is actually a challenge, you have to understand what means all people.

Working closely with him means never being allowed to forget, for even ten seconds, that by looking down on others or hating them, you are being a douche and an asshole. It means never being allowed the luxury of believing yourself to be better than anyone, even momentarily. It means having a Patron who won’t take your side in an argument. Instead, he’ll explain the other person’s points to you, and make you think about that.

He does, however, have your back.

A story: One time, I had a fight with a friend that resulted in me being essentially homeless for a few months. I managed to get back on my feet, but was determined not to ever speak to this person again. One day, she contacted me and said, “Nothing is going right. Ever since that fight, I can’t seem to hold down a job or an apartment. I need you to forgive me.”

The same friend, however, while in an airport waiting for a plane back to go live with her mom, saw a shadowy figure slipping quarters into her backpack out of the corner of her eye. She turned to look, but the person was gone. The money, however, remained.

His lesson is this: Every person you hate is a real person, and they have people who love them. If they did wrong, it’s because they don’t understand. If you understand where their lack of understanding is, and if you develop empathy for them, it will enrich you as a person. Be persuasive.

Sometimes, I like to imagine what it might be like having another deity looking over my shoulder. I imagine that when other deities gather their followers together, it must feel very affirming. I can just imagine a room full of Dionysians. They all get along. Or I imagine a room full of Apollonians, spinning in their respective orbits in a fancy ball room, trancing out to music, talking about science to one another or to no one in particular. The Aphrodisians are comparing their Sephora compacts, and the chosen of Hephaestos are squeeing about the latest tech gadgets.

When Hermes brings me together with people, there’s always at least one random person I already know who I am shocked to discover has picked him up as a Patron, and who I have some “history” with. His followers are not uniform in belief, attitude or profession. As a god of shepherds, he is all about gathering in the strays. He brings us back together.

Things Don’t Belong To You.

For many, ownership is a very comfortable concept. We look at the objects around our home, and we think about them being ours, and about how we got them, and the rights that we have to those objects because of that. We expect to wake up to a certain compliment of objects — our shoes where we put them, our keys where we hung them, our toaster oven right where we left it so we can toast ourselves up a nice breakfast, our car where we parked it, our bike where we left it chained up.

Those of you who live in a world where that seems like a realistic vision, I hate you, slightly.

I wake up, every morning, with no expectations. I have a simple goal: dressed and out the door. Sometimes this means negotiating with Hermes to get my left shoe back. I’m sorry. Not my left shoe. His left shoe. That’s who it belongs to now, because that is who has it in his hand.

I recently bought a bike to replace the one that was stolen, so I’m not going to harp on that for very much longer, but I will never forget the conversation we had about it, before, and after.

Hermes: Hey, are you going to ride that bike ever again?

Me: Not while I’m working at this job. They consider bike riding to be immodest.

Hermes: Are you going to ride the bike somewhere else? Exercise is good, you know.

Hermes: You weren’t riding it. You didn’t need it. A friend needed it more than you did, so–

Hermes: Because your bike had the easiest lock to cut. I’m really sorry, but you weren’t riding it, and he needed the money. You’ll forgive me, right?

Hermes: I knew you would.

But it was my bike, right? Nope. It was a bike. I had control over it, and then that changed. Ownership is illusory. The only thing I can ever count on is that things are going to somehow be ok, no matter what.

Because the flip side? When it’s me who is stranded in the middle of nowhere, down to my last dime, just enough money for a train ticket home will blow my way. It always has. It always will. On top of that, my ability to think through situations that aren’t at all what I expected them to be has been sharpened. The dust will never settle, but it’s ok. I’m really good at navigating through the dust-cloud.

He’s A Messenger And Traveller. He Speaks Every Tongue.

I recently watched the first movie in Peter Jackson’s Hobbit trilogy. In case you’ve neither read the books nor seen the movie, I’ll give you a little background. The tall guy in the pointy grey hat is a nearly-immortal wizard named Gandalf. He is trying to get the little fellow Bilbo, who is a comfort-seeking creature by nature, to take off on an adventure. Gandalf proposes, Bilbo says no, so Gandalf marks Bilbo’s door with a rune, to let the adventuring party know where they are expected to meet.

This is life with Hermes, in a nutshell. Kindly sheepish expression and all. Just replace the dwarves with various gods from around the world.

“Oh Hai! I came to visit, and oh, I brought Odin. And Isis. And Hephaestus. And my Dad. You don’t mind, right? Is that chicken? Let’s all go on an adventure!”

I hear some people say of gods, maybe even especially Greek gods that they are arbitrary and cruel. You can’t emulate them, because they don’t have the same moral obligations that humans do.

For me, though, emulating Hermes has been the best possible kind of spiritual education. He has taught me to be charitable, to think well of everyone, and to be a more hospitable person. I am still struggling with seeing as he sees, to accept that every viewpoint has its merit, if you can only listen.

I’m looking forward to the adventures which lay ahead.